Asparagus is one of the most popular vegetables in the West. Some regions have economies that are strongly interlinked with the growing of asparagus. For example, in Heide, Germany, there is even an asparagus road in which loads of tourists, for a single month in a year, participate in a true asparagus festival. The hotels are filled, the restaurants are buzzing, the surroundings are full of pedestrians and cyclists alike. They travel from one household to another, to the town, to the tavern where they taste asparagus prepared in different ways.

Asparagus are not needy and can yield crops for decades. It is a very prospective plant in both a personal and an industrial garden.

One of the rules of thumb of asparagus is to eat it as soon as possible after harvesting. Waiting even a few hours makes the asparagus start losing its taste qualities. This is why it’s worth it to grow asparagus yourself. To eat fully and even save a little for your friends, around 15 bushes should be enough for a four-person family.

Asparagus can be grown from seeds but it is much easier to buy ripe sprouts. They can be ordered online. 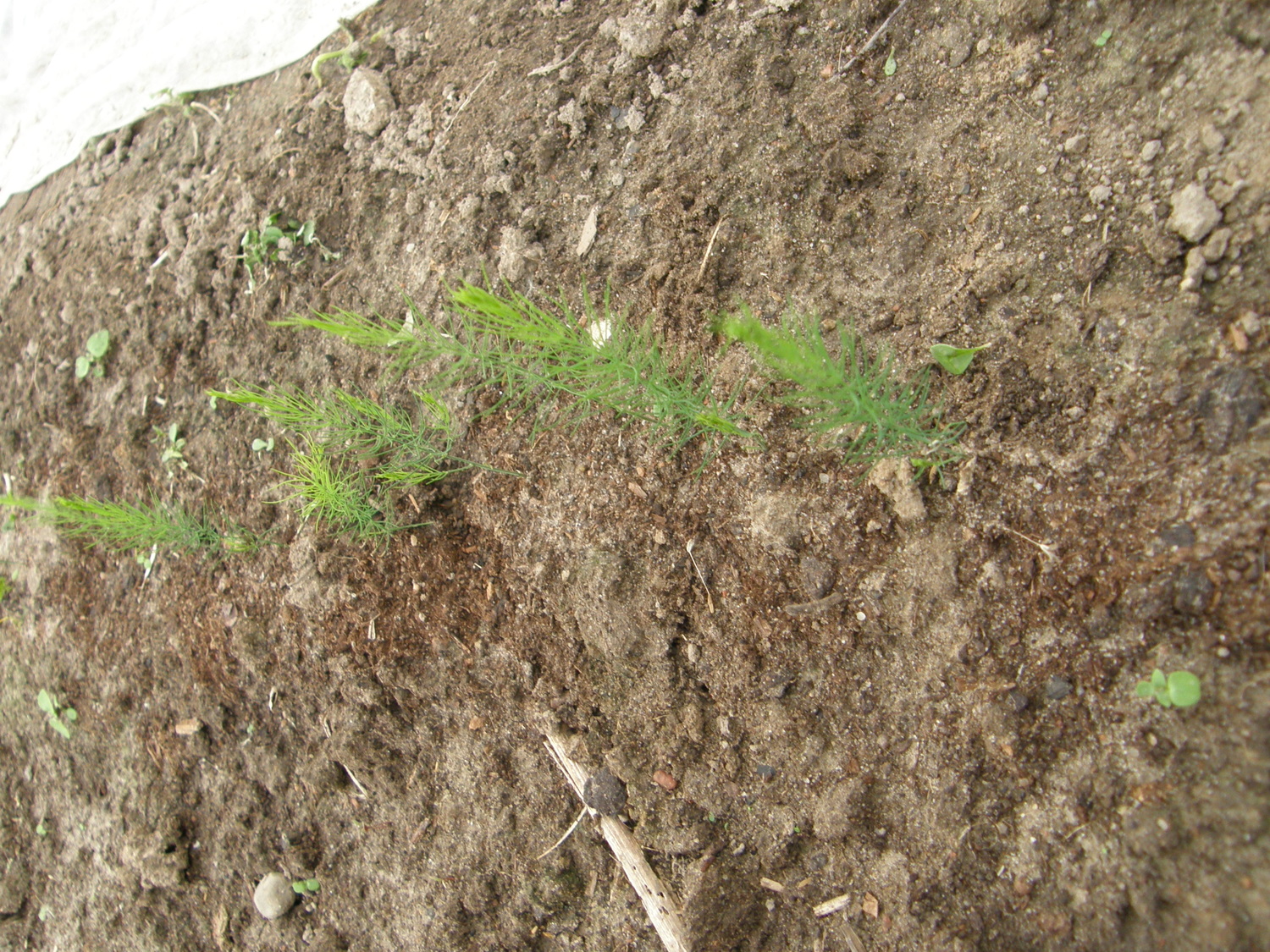 First-year asparagus sprouts grown from seeds. The yield can be tasted only in 3 years. The ground should be loose. 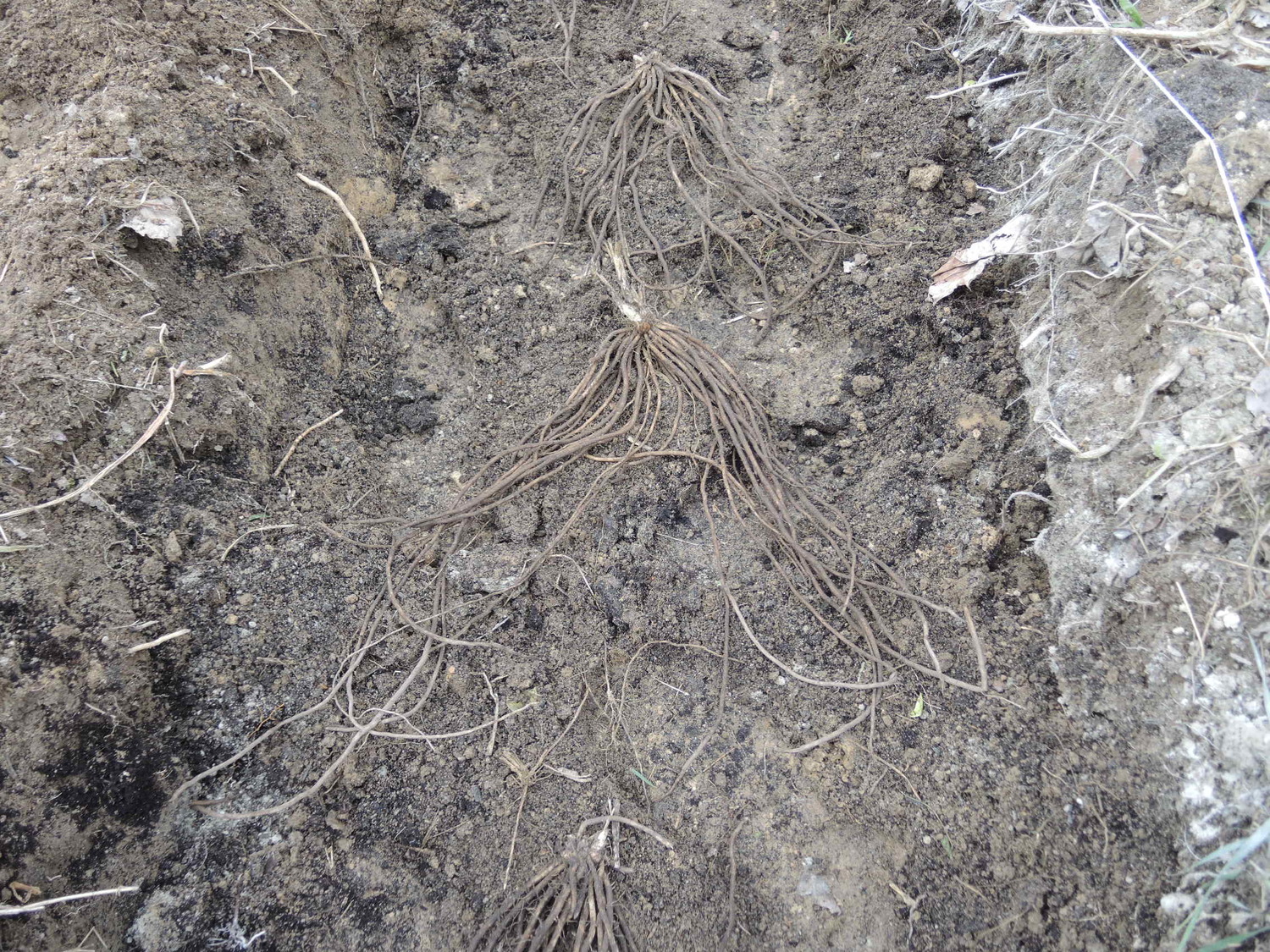 It is much easier to plant ripe asparagus sprouts.

Asparagus like fertile and loose ground. They grow in pretty much any soil but if it is hard and not fertile, you will have a poor yield. 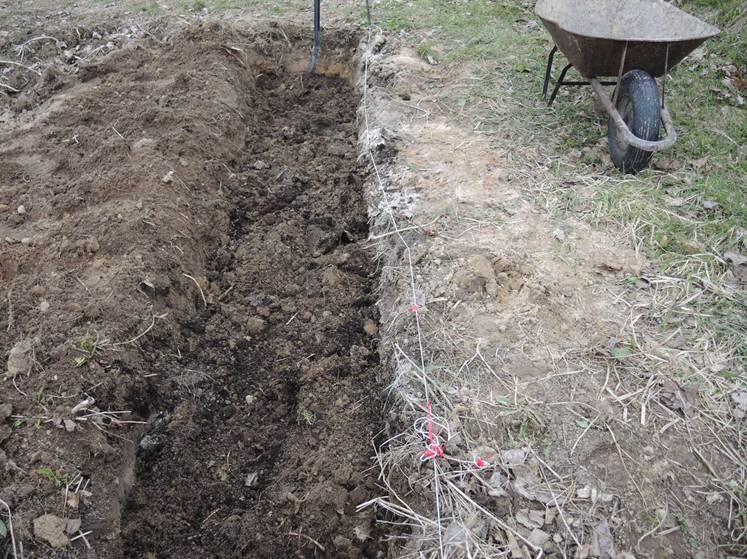 If the ground is heavy and not fertile, it is worth it to change the whole soil layer. The ideal mix that will ensure a yield for decades is: one third peat, one third compost and one third fertile soil. The peat should be neutralised with the use of dolomite. It is worth it to add phosphorus (superphosphate) and potassium (polyhalite) fertiliser to the mix, as well.

A 50 cm deep hole is dug of which ⅔ are filled with a fertilizer enriched soil mix. As shown above, asparagus sprouts are put in every 30-40 cm. The roots of an asparagus sprout have to be spread like the tentacles of an octopus. A ~5 cm soil layer is poured on the sprout. When the asparagus sprout out, an additional 5 cm layer is poured. The hole should stay filled incompletely, instead it should be filled gradually each year, dedicating 0.5 - 1 bucket of soil mix per sprout. This will be a constant humus refill as well as a mulch.

Asparagus should be planted in a sunny place, even if they can grow in a little shade. Good exposure to the sun will ensure a strong growth of green manure which heavily influences next year’s strength and number of sprouts for the bush.

If you are preparing to grow sprouts in an industrial way, tranchee digging would be too difficult of a process. You should evaluate the heaviness of the industrial garden, the amount of humus. After deeply ploughing in Autumn, you should add peat, compost and rotten manure. In a properly prepared and naturally fertile mellow soil, the asparagus sprouts are put in 15-20 cm deep furrows. The furrows are made every 1.2 - 1.5 meters,  based on the cultivation technology you have.

The next year after planting, the asparagus becomes stronger and shoots up sprouts that can be harvested for eating. In the first yield year, it is recommended to shorten the season a little bit and harvest for 20 days. All stems should be harvested, as not harvesting an overgrown stem can halt the growing of new stems. Next year, the season should be prolonged up to 40 days.

The asparagus sprout is cut a little lower than or at the surface of the soil, trying not to harm stems that are growing nearby but have not yet surfaced.

During early Spring, after the frost has disappeared, it is worth it to deeply hoe the garden-beds, removing all the weed roots, preparing the soil for an easy passage of the stems in the process. White asparagus are hilled or an additional layer of mellow soil is poured, which is smoothened out after the harvest. The asparagus will be tastier and will have a longer soft mast if covered with a film. The film would also protect them from being frost-bitten, which often happens to the first stems. 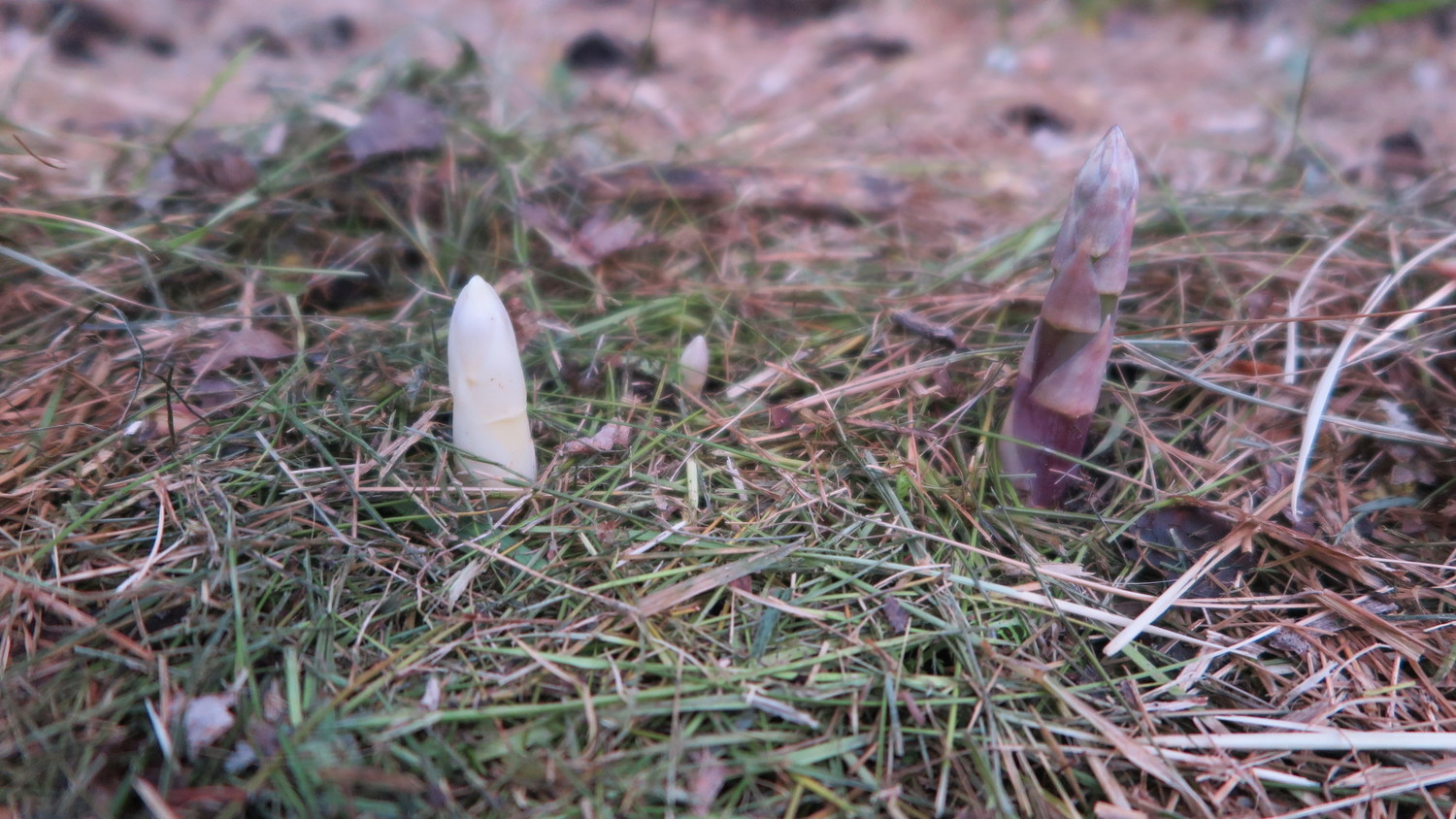 Asparagus masts, the left one was partially covered by grass. It will be white and softer.

While growing, asparagus use lots of water, so they need to be watered. The soil near the roots should be damp but not too watery as asparagus don’t like it. 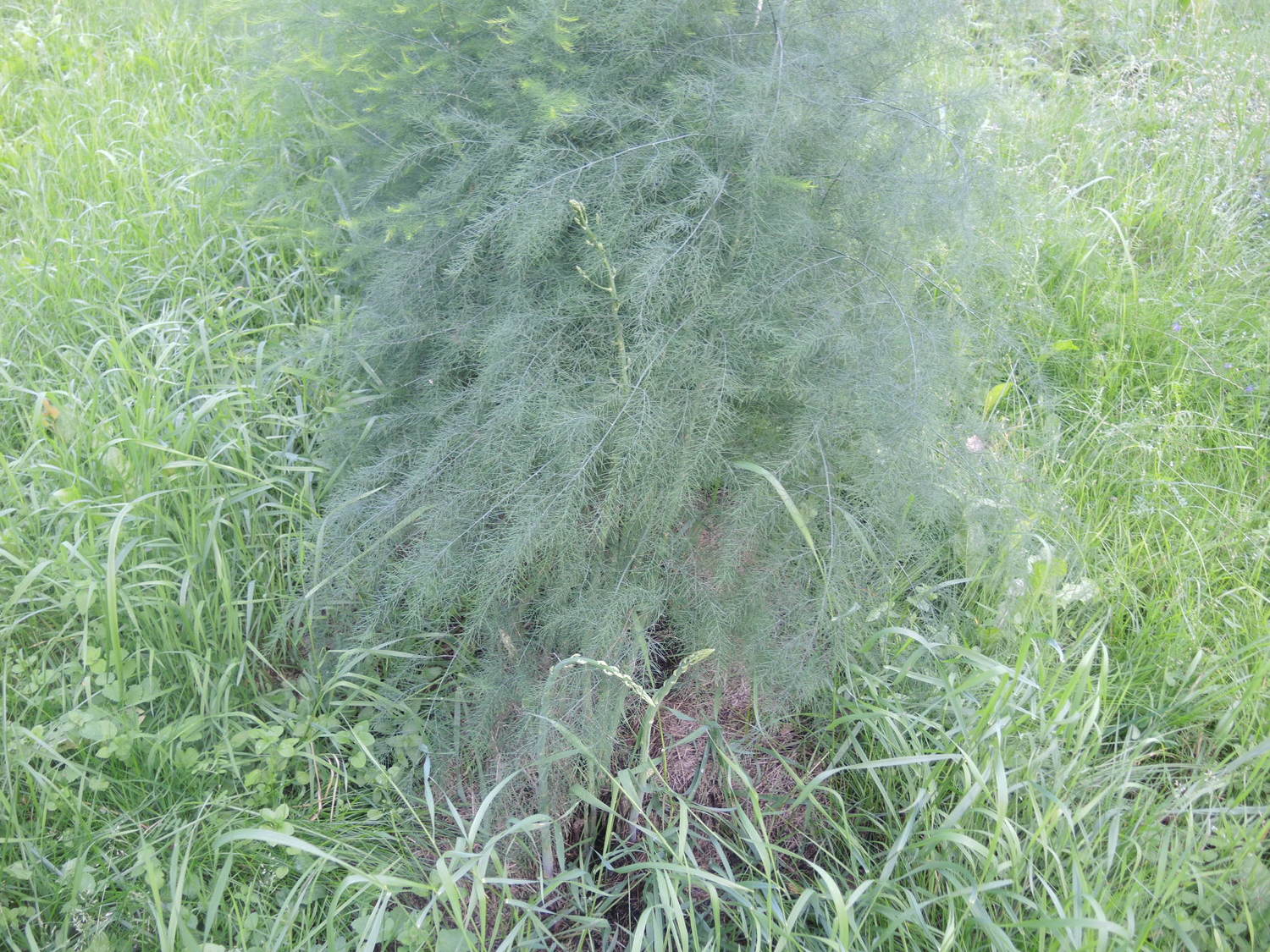 Asparagus do not require extensive care, they usually overcome weeds. It is enough to cut the grass from the sides a couple times per year. It can be used as a mulch under the asparagus. It will reduce the growth of weeds and won’t allow humidity to condensate.

After the harvest, the asparagus are fertilized. NPK fertilizer is used and it is best to use a fertilizer mix made specifically for asparagus. In industrial farming, it is better to use individual fertilizer proportions after you investigate the soil and evaluate how much minerals should be added.

In Spring, 15- 6-15 NPK is optimal, the most important thing is a high amount of Magnesium (~5 percent) and some Manganese.

Naturally, asparagus are quite immune to diseases and don’t have many pests.

However, if planted too tightly, they are susceptible to fungal diseases. 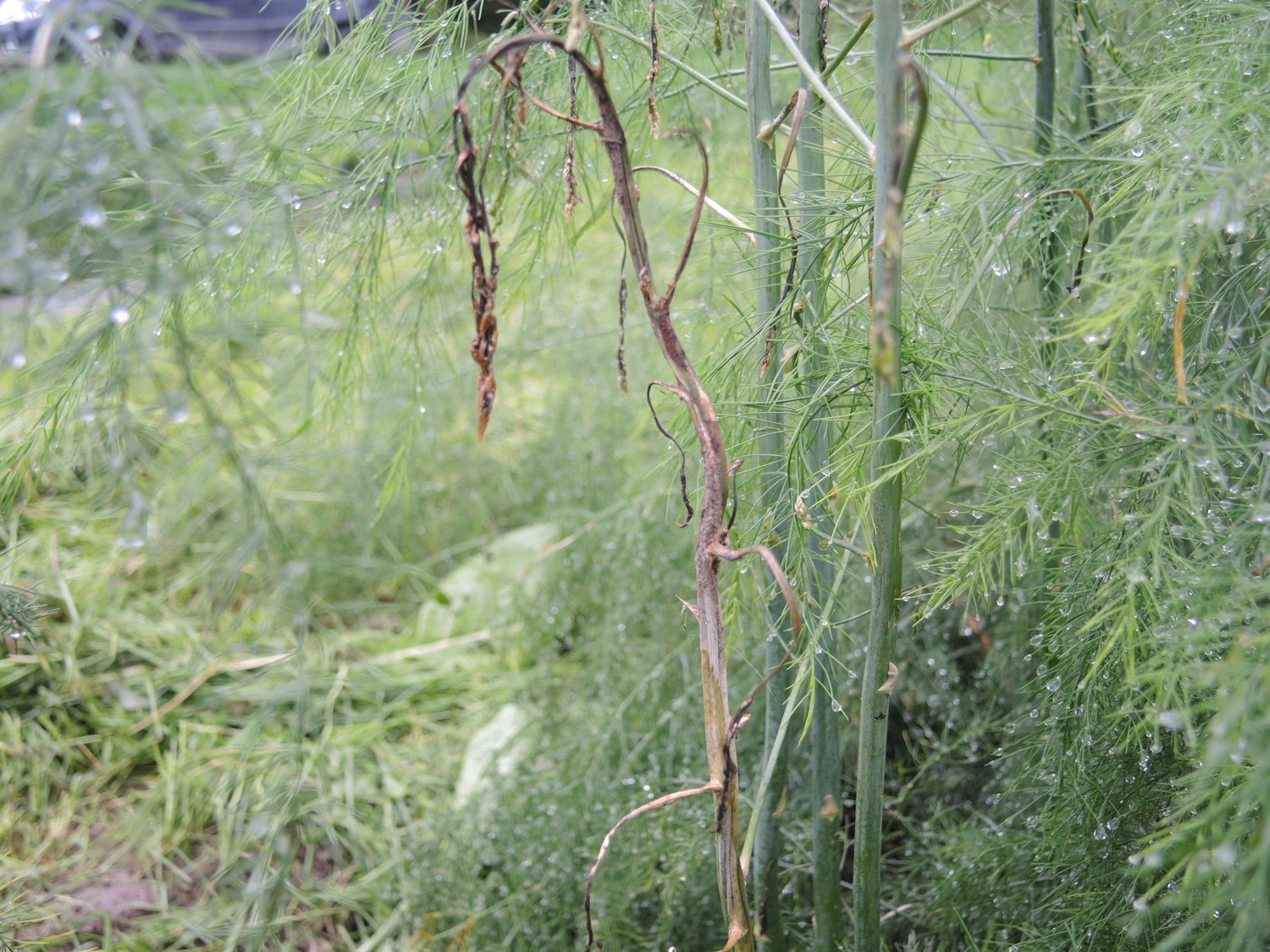 After an asparagus has caught a fungal disease, you need to remove the harmed stems. The bush and the ones around it need to be sprayed with a copper sulfate solution.

Asparagus are widely used for culinary means. They are very tasty when not thermally prepared. Their taste is similar to the delicate taste of hazelnuts. Asparagus’ taste is spotlighted very well with butter, cream and eggs. Chanterelles, morels and cheese work wonders, too. Asparagus also soften and provide contrast for the taste of smoked meat, fish and poultry. 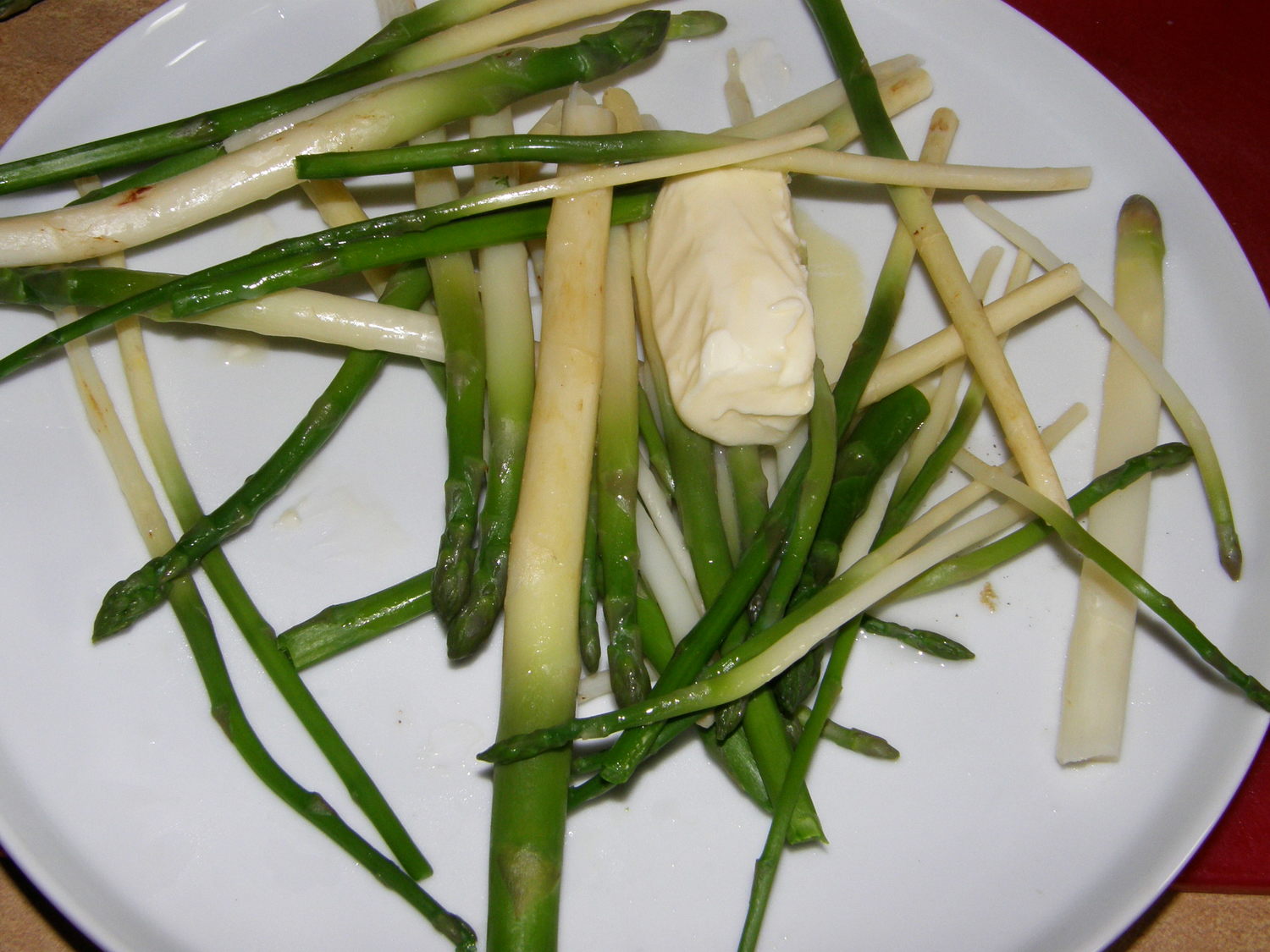 The easiest way to prepare asparagus is to cook them for a bit. You can cook them for around a minute in salted water (you should put them in the water when it is already salted). Or you can keep them over hot steam for a couple minutes. You can also additionally roll them in butter in a pan, or fry them fresh for a minute in heated butter. When thermally preparing asparagus, oil is not used because it takes away the taste. Cooked asparagus may be put down on butter and sprinkled with cheese. Asparagus should be eaten with a butter-cheese sauce. 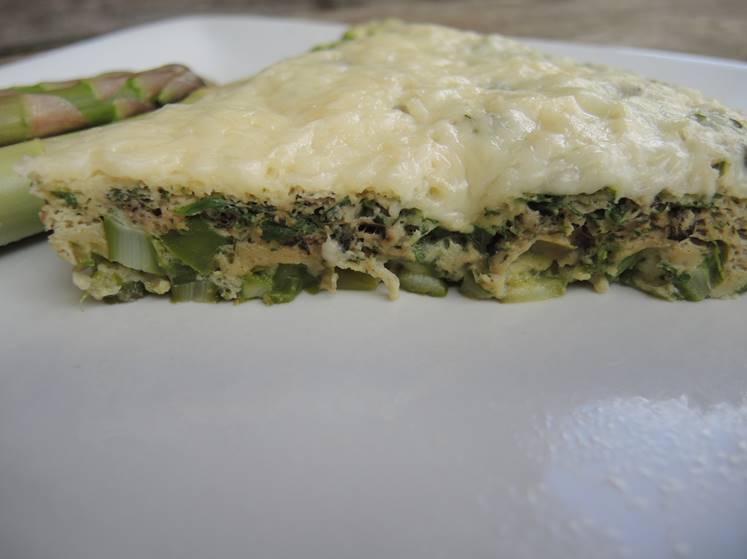 Culinary experiments abound when making casseroles and pies with asparagus. They are prepared either in a pan or an oven. With the use of eggs, flour and cream, you will get a spongy and juicy pie which will satisfy even the most picky of eaters. The tastiest pies are cooked with chanterelles and morels. The less thermal preparation, the richer the tastes.

Mix and whip the eggs, flour, milk and cream. Then, heat the butter in the pan and put in the asparagus and chanterelles. Pour in the egg mix and sprinkle with cheese. The cheese will spread over the whole casserole. Put on the cover and in 10 minutes (depending on the thickness of the casserole) the meal is ready. For cooking in the oven, bake for 20 minutes at a temperature of 180 °C.