Modern steel frame door frames are great, they are stiff and resist bending. They

already have the hinges on. The are compact to transport and can be easily assembled by semi skilled labour. A series of tabs in the jambs poke through slots in the head and are belted flat with a hammer. Spreaders at the bottom keep them at the correct size. You need to be on the ball with your selections though, which hand? Left or right opening, how many hinges. Usually I use a pair of hinges for internal doors, and three hinges for external ones.
Metal door jambs come in different sizes and qualities.
Fixing Door Jambs
With stud walls usually it is a carpenter that fixes the door frames. Of course it may or may not be the same guy that later fixes the the doors. Either way, with stud walls the team that are building the walls fix the door jambs as well.
Contrast this to the mad rush that happens when a team of Prima Donna brickies descend on the job. (A touch of the age old carpenter/bricklayer rivalry showing up there, sorry about that ).
A few examples of what can go wrong when bricking them in.

Door Jambs - Things that can and do go wrong.

Most brickies do a good job, read the plans OK and fix the door frames and windows as they go. Brickies are nearly all (where I am anyway) paid by the amount they lay. They make more money when they work fast. If you are an owner builder, try to keep an eye on them.
If the door jambs are not true, with any of the faults above, then the carpenter is going to squeal, and probably ask for more money. Correctly fixed jambs mean it is a breeze to fix the doors.

Door Jambs - Installed steel jamb with the bottom spreaders still on.
Here's a shot of one of these door jambs when built into steel stud internal walls. The plasterboard flusher has to sand yet, but the metal stays are still there. These will be snipped off by the carpenter when he fixes the doors. Snipping them off is the best option, you belt them off with a hammer or just about kick them off most times, but you will "kick yourself" if you loosen the jamb instead.
Typical Layouts
Here is a layout of a timber door frame fixed to a timber stud wall. For a brick wall it would be similar, made by the carpenter on the job to suit the wall's finished thickness, but metal ones are far more convenient. 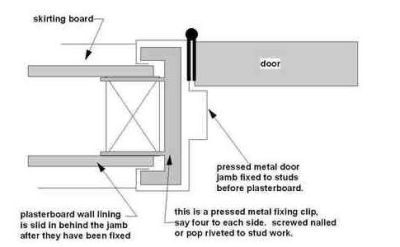 Here is a metal door frame in a stud wall. If it was in a brick wall the brickie would build it in as he builds the wall, using wire clips that get hooked into the frame and embedded in the mortar joints. About four clips to each side. Metal frames are simple to fix in stud walls, either steel or timber studwork. Just make sure you get the opening in the studwork right, as there are different allowances for the various types clips that the frame manufacturers use.
Bill has his own building related website.
Comments (0)
Sign in if you wish to comment