Building Stairs Out of Timber
Article by Bill Bradley

I guess that the very first timber stair was a log that was leaned up against something at a higher level, and early man walked up it instead of climbing using his hands. It wouldn't have been long before notches were cut into the log to make steps.

We have improved a bit since then, but the basic requirement is the same, to get to a higher level easily and with safety.
Indoor Closed String Stairs
The stair type shown below is usually made in a workshop, and transported to the job site, and then it is lifted into position by a number of men.

Another popular method of internal timber stair construction is by using cut strings as the load bearing members.

This method is popular in North America. Compared to the routered method, cut strings have a some advantages and some disadvantages.
On the other hand, I believe that they are probably more labour intensive, and because the strength of the cut supports are in the section under the triangular cut outs, then they have to be deeper over all. 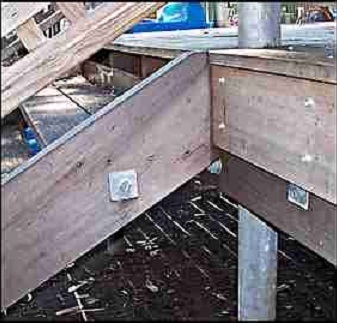 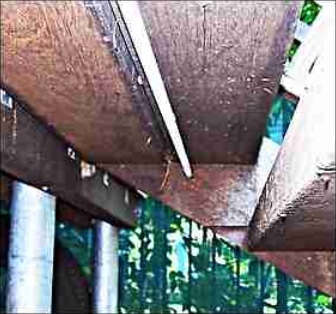 Outdoor Timber Stairs
For external all timber stairs up to say 1200 wide I like to use 50mm thick hardwood stringers and treads, with the treads open, that is no risers. 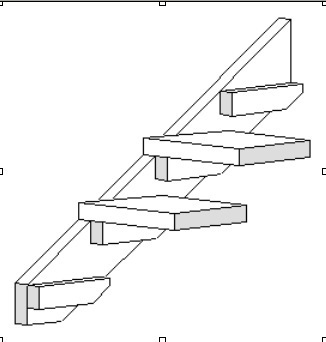 Another Simple Outdoor Stair
Even simpler than the previous example, if you don't have a router or if you don't want to take strength out of your stringer, is to use cleats to support the treads.

This is quick and easy with nails, for a temporary stair during construction, or for a bit better finish with screwed and plugged fixings.

The cleats supporting the treads can be pieces of timber, but another way would be to use galvanised angles pre-drilled for screws or bolts. If screws are used as the fixings they can be from underneath. This way the top of the tread is unmarked.